Caroline Burke
Caroline has been a member of Belmont since 2004. She has served on the board before.  Caroline was co-chair of the ladies guild for many years having responsibility for organising the weekly Kiddushim. She 'retired' from this role last year.

Caroline has worked at Beth Jacob Grammar School in Hendon for 28 years.  She is Deputy Head Teacher and teaches maths. She has two daughters and four grandchildren. She spends a great deal of time with her family and enjoys playing bridge and walking.
Barry Gilbert 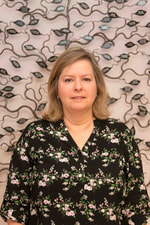 Bev Ginsberg
Bev joined Belmont in 2014, with her husband Peter and daughters Jessica, Rebecca and Hannah. The family immigrated from Cape Town in 2007.

Bev has been happily working as Finance Administrator at a Jewish charity in Edgware since 2010. She helps with kiddush rota, 'festival food' setting up and Mitzvah Day.

Salvador Mazliah
Salvador joined Belmont in 1988. Together with his wife Barbara, he started the Belmont Film Club in 2009. Salvador and  Barbara a have three children and two grandchildren.

Salvador has recently retired from a long management career with Shell International and he is currently involved with several charities, including Norwood. Salvador’s main interests are his family, friends, charitable work and Belmont Shul. He enjoys walking, travelling, bridge, films and opera.

Norman Rubin
Norman joined Belmont in 1973. He was elected to the Board in 1974 and was the membership officer until 1976 when he became an Honorary Officer. Norman was involved in the construction of the shul and was a warden in 1981 when the building opened. He served on the Parents Association; Building Fund; Education Committee; Soviet Jewry Committee; and the Israel Society. Norman was involved in the induction of four of our Rabbis. Norman rejoined the Board in 2011 and chairs the Belmont Social Group as well as being a member of Belmont Cares. One of his highlights working for Belmont was the drive to Minsk in 1990, to open a kindergarten started by two young girls from Minsk. The kindergarten is still going and the (now) women are now happily living and working in Israel.

Before retiring, Norman was a menswear agent selling to independent retailers in London and the Home Counties. He has been married to Estelle since 1961. They have two sons and five grandchildren. He is a sports fan and enjoys the theatre and eating out.

Elvin Samson
Elvin has lived in Stanmore for 20 years joining the Belmont community 10 years ago. Elvin is involved with the Belmont Community Cares team and, on Mitzvah Day, can often be seen with gloves and black rubbish bin outside the Shul!

A keen bridge player, he also serves on the Belmont Police Ward Panel.

Vivien Waters
Vivien joined Belmont in 1982. In the past she was a member of the shul’s LBC group and the L’Chaim learning group. She is currently a regular at the Rabbi’s shiur and the Belmont Book Club and helps out on the Kiddush rota.

After completing a degree in French and Italian and a postgraduate qualification in translation and interpreting, Vivien became a Foreign Exchange Dealer in London. She then worked in Hong Kong as a Bullion Trader, returning to London to continue in this work until the birth of Naomi in 1984. She then became a full-time mother for 10 years during which she completed a PGCE with the Open University. Vivien worked as a French teacher for 23 years at a Comprehensive school. She became an Assistant Headteacher with a pastoral and academic role before retiring in September 2018. She has recently qualified as a Doula, supporting families through childbirth.

Vivien is married to Eddie. They have four married children and are blessed with many grandchildren. Vivien enjoys walking, theatre, concerts, reading and DIY projects as leisure activities.

Illona Weitzman
Illona has been a Primary School teacher for 30 years, with 25 of them in Jewish Education. Most recently she joined the staff of Beis Yaakov Primary School in Colindale.

Illona moved to Stanmore in 1997 and became a member of Belmont Shul with her husband Stephen. Since then they have enjoyed attending many community activities and events with their two children Katie and Dan. Recently Dan has been Barmitzvah at the Shul and Illona have joined the Kiddush Rota.