Caroline Burke
Caroline has been a member of Belmont since 2004. She has served on the board before.  Caroline was co-chair of the ladies guild for many years having responsibility for organising the weekly Kiddushim. She 'retired' from this role last year.

Caroline has worked at Beth Jacob Grammar School in Hendon for 28 years.  She is Deputy Head Teacher and teaches maths. She has two daughters and four grandchildren. She spends a great deal of time with her family and enjoys playing bridge and walking.

Beverley Corper
​Beverley has been a member of Belmont since a young girl as her parents have been members since the 1970s.  She has attended various Clubs and functions at Belmont and was on the Nursery committee, ran the Mother and Toddler Group, was a leader at Belmont Maccabi and is currently also involved in the Kiddush Rota.

She is married to Marc who used to play in the Belmont Cricket Club and have two daughters Sophie and Leah.  Along with Marc they run the family business China Presentations.

Karen Dorman
Karen , with her husband Jonnie , has been a member of the Belmont Community since 1983. In that time she has been involved in various areas of Shul life such as having joint responsibility for the Kiddushim, serving on the BBC (now known as F@B ) and the Nursery Committee in the days when we had a thriving nursery as well as being on a variety of rotas .

Karen is a teacher and works at North West as the Year 5 teacher. She has three children and five grandchildren, who keep her very busy .

In her limited spare time she enjoys reading , visiting museums and art galleries and spending time with family and friends .

David Gerstler
​David and his wife Carole have been members of Belmont since 1980 and has previously served on the Board of Management.

David is enjoying retirement from business but is currently involved in his son’s sports management company , he enjoys watching all sports and playing tennis.

Barry Gilbert
Barry and his wife Carolyn have been members of Belmont shul since 1987. He joined the F@B Committee in 2008, becoming joint Chairman four years later. He enjoys working with committee members to help organise enjoyable fund-raising events and activities which benefit the shul and the Belmont community. More recently he has joined Belmont Community Cares as a volunteer.

Barry is a Chartered Surveyor and works as a development manager for a company that specialises in the sale and development of former railway property. Barry and Carolyn have three sons who have kept them quite busy over the years and Barry is a keen supporter of Liverpool FC.

Anthony Kaiser
Anthony joined Belmont in 1980 - before the building was opened. He was a general backbencher and schlepper and on the security rota once it started in the late 1980s. Anthony joined the choir in 1999 and the Board in 2014, becoming a Warden in 2015. Unfortunately he stood down for health reasons in 2019 but is still on the Council.

Anthony is a retired consultant neonatologist having worked nearly 30 years at St Thomas' Hospital; that means looking after ill newborn babies (and their families), training junior Doctors, students, midwives and nurses. He continues to be active in promoting ethical practice in clinical medicine and medical research, and improving the care of newborn babies both at St Thomas' Hospital and nationally. He hopes to begin exercising his training as a Hospital "visitor" after pandemic restrictions are lifted.

Anthony’s first love is reading, mainly science fiction. He likes listening to music especially classical. He enjoys observing the world and thinking about how it works, including challenging ideas that deserve to be. He walks and usually swims regularly but is not good at or interested in sport generally. He is a chocaholic. 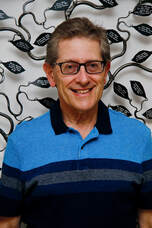 Barry Lightman
Barry and his wife Linda have been members of Belmont since 1987. They married in 1977 and have two children and five grandchildren.

Since 1988 he has sung with the Belmont Shul Choir and led Shachrit and Musaf services on Shabbat and Yom Tovim.  He has been a member of the Shabbaton Choir since 2000. Barry is Vice President of the Akim UK Charity Committee which raises funds for Akim Israel which has many homes and facilities for mentally and physically handicapped in Israel.

In his spare time, he is he plays tennis, golf and chess, albeit not to a particularly high standard.

Ellen Moss
Ellen is from Toronto and joined Belmont Shul in July 2016 when she moved from Toronto, Canada with her husband Michael who is British. She has been on the Belmont Community Cares Team for several years calling members, and visiting seniors, she assists on the Kiddush Rota, and helped with the Belmont toddlers' playgroup until it closed a few years ago. She attends the Belmont knitting group making blankets etc. for the needy in Israel, and The Ladies Discussion Group.

In her spare time, she enjoys, reading, baking, Pilates, theatre, studying Torah with her learning partner, lectures in Torah, exploring London sights and travelling in England.

Norman Rubin
Norman joined Belmont in 1973. He was elected to the Board in 1974 and was the membership officer until 1976 when he became an Honorary Officer. Norman was involved in the construction of the shul and was a warden in 1981 when the building opened. He served on the Parents Association; Building Fund; Education Committee; Soviet Jewry Committee; and the Israel Society. Norman was involved in the induction of four of our Rabbis. Norman rejoined the Board in 2011 and chairs the Belmont Social Group as well as being a member of Belmont Cares. One of his highlights working for Belmont was the drive to Minsk in 1990, to open a kindergarten started by two young girls from Minsk. The kindergarten is still going and the (now) women are now happily living and working in Israel.

Before retiring, Norman was a menswear agent selling to independent retailers in London and the Home Counties. He has been married to Estelle since 1961. They have two sons and five grandchildren. He is a sports fan and enjoys the theatre and eating out.

Elvin Samson
Elvin has lived in Stanmore for 20 years joining the Belmont community 10 years ago. Elvin is involved with the Belmont Community Cares team and, on Mitzvah Day, can often be seen with gloves and black rubbish bin outside the Shul!

A keen bridge player, he also serves on the Belmont Police Ward Panel.

Michael Swan
​Michael and his wife Doreen and son Marc joined Belmont Shul in about 1984. In the early years he was a member of the Parents' Association committee and helped with the cubs and scouts for about eight years. He now volunteers whenever he can do anything the shul needs. His son Marc is married to Lauren and he now has a beautiful grandson Hugo.

Michael was in ladies fashion and in between spent a year in Israel 1967/68 on kibbutz for three months, reservist duty in IDF and working on Mount Scopus later on becoming a black cab driver. He was in a singing company for about 20 years and now retired he does small shows at various places for Jewish Care. Since childhood he has supported Spurs.

Vivien Waters
Vivien joined Belmont in 1982. In the past she was a member of the shul’s LBC group and the L’Chaim learning group. She is currently a regular at the Rabbi’s shiur and the Belmont Book Club and helps out on the Kiddush rota.

After completing a degree in French and Italian and a postgraduate qualification in translation and interpreting, Vivien became a Foreign Exchange Dealer in London. She then worked in Hong Kong as a Bullion Trader, returning to London to continue in this work until the birth of Naomi in 1984. She then became a full-time mother for 10 years during which she completed a PGCE with the Open University. Vivien worked as a French teacher for 23 years at a Comprehensive school. She became an Assistant Headteacher with a pastoral and academic role before retiring in September 2018. She has recently qualified as a Doula, supporting families through childbirth.